Now that the Warmachine/Hordes starter sets are finally complete I can focus on the one Hordes army I really want to work on, and that is the Trollbloods. Over the last few months I have managed to amass around 40pts of the mighty trolls (roughly 25-30 models). Right now everything is built and based so all they need is a fresh coat of paint and they are done. A bunch of friends in my gaming group is doing an Escalation league down at our local store and the first round of games is just 15pts with only casters and warbeasts/jacks. So, with that in mind now that my Axer is totally finished I figured it was time to start working on the other beasts.

Before I post the pics of the new beasts I figured I just wanted to mention something about how I am painting them. Basically after finishing those starter sets and my original Troll Axer I realized it actually took LONGER to paint the Axer then it did one of the four starter sets. I also realized that I will probably never enter at tournament with this army as my interest in Warmachine is just having fun, casual games for my friends. The last thing is I recently just got promoted at work so my painting time has been knocked down to 3-6 hours a week total, if I am lucky. I decided right there that I dont really have any interest in finishing 1 or 2 models a month so it was time to rethink how I am painting my army. I decided on going somewhere in between what I was doing for the starter sets and the Axer and this is what I came up with: 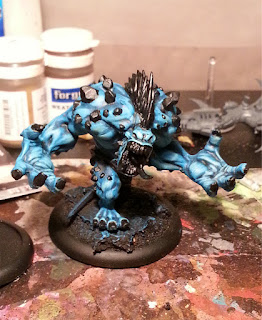 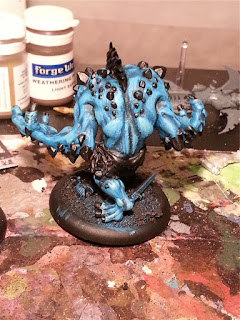 The skin on the Mauler here took roughly 45mins total. I drybrushed the first two layers on his skin to get a nice base then went over the top two layers by physically painting on the high lights. I also spent a bit of time with some different inks knocking down the shadows.  All in all I am super happy how it turned out considering the time. I really like how bright he is and how gestural the high lighting is. It's a style I want to keep going throughout the army.  Here is the Pyre Troll: 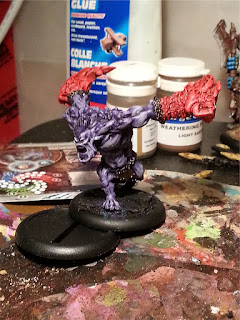 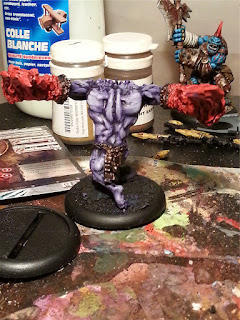 The thing I am loving about these guys is they are still looking decent (will look considerably better when done obviously), they are super fast and most importantly they are super fun to paint. I am going for the "codex" look on this army which is why the Pyre Troll is purple. I am going to do a fair amount on work on the fire including some object source lighting.

Next Up: I will keep plugging away on these ice crapping snow honkeys so hopefully in the next week I can post some finished pics. After that I will be doing some more new units for the Trolls as well as some thoughts on the new Eldar Codex plus a whole bunch of new Eldar models!
Posted by Ghoulio at 11:00 AM